From MSPpedia
Jump to: navigation, search 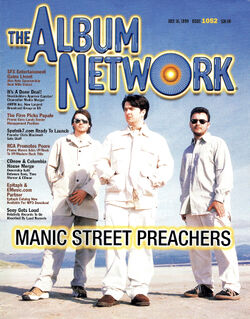 "What I Find Strange Is That People Find It Bizarre To Change Rather Than Stay The Same" - The Album Network, 16th July 1999

TV Guide claims that "'7th Heaven' is the best show you're not watching." To the same effect, The Manic Street Preachers are the best band you're not listening to. The group which formed some eight years ago in their hometown of Blackwood, Wales, is on their fifth full-length, This Is My Truth Tell Me Yours. In recent years they've won virtually every award possible in their native country, including numerous Brits (sort of like a UK Grammy), and kudos from such publications as The Independent, Daily Telegraph, Daily Express, Melody Maker, NME, Select, Vox, Kerrang!, Music Week and Hot Press; they were even given Q magazine's Best Band In The World Today award, about which Manics' lead singer/guitarist James Dean Bradfield said he didn't see how that could be possible, considering no one in America knew who they were.

Three years ago, Bradfield shrewdly observed "If a British band comes to America and they're really gung-ho and they go 'We are British and we're going to break America' people just switch off. We can understand that America has got its own culture, so why should they take us onboard? We come here to do our stuff, [if] something happens, it happens and if it doesn't we're not going to be insulted. Of course we'd like to sell records, but we're not going to push ourselves on people. It either happens or it doesn't, and we're not going to say, 'You should like us because we are fucking amazing.' We're not going to say that anymore." (more...)