Difference between revisions of "Roaring To Go - Beat, 19th June 2013"

From MSPpedia
Jump to: navigation, search 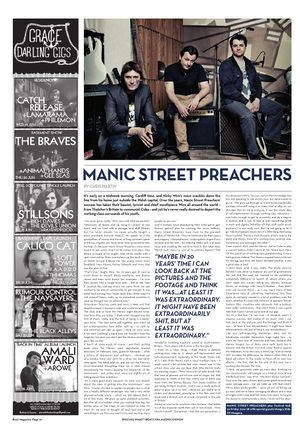 It’s early on a midweek morning, Cardiff time, and Nicky Wire’s voice crackles down the line from his home just outside the Welsh capital. Over the years, Manic Street Preachers’ success has taken their bassist, lyricist and chief mouthpiece Wire all around the world – from Thatcher’s Britain to communist Cuba – and yet he’s never really desired to depart the working-class surrounds of his youth. “I’ve never gone, really,” Wire says with mild amusement. “Obviously, all bands end up living in London at one point, and we lived with a manager and stuff [there], but I’ve never moved, I’ve never actually bought a place anywhere [outside Wales].” He speaks as if the possibilities of excess and travel, of long summers spent in the Los Angeles sun, have never even occurred to him. Perhaps it’s because Manic Street Preachers were never meant to last; never meant to be career rock stars. One album, a couple of hit singles, then retire, maybe with a spot reserved for them somewhere up the back corners of Welsh musical folklore. For the young James Dean Bradfield, Sean Moore, Richey Edwards and Wire, that was the plan. At first.

“That’s true,” laughs Wire. “22, 23 years ago, [it was] as much down to myself, [that] manifesto, and Richey. James and Sean were always the musicians – I’m sure they always had a longer-term plan – but at the time it seemed like, coming where we came from, we just wanted to be almost cartoon-like to get noticed. It was quite hard coming from Wales back then; there wasn’t a rich musical history really, so we presented ourselves in what we thought was an extreme way.”

Generation Terrorists came and went in 1992, and that should’ve been it. Except it sold, and so did Gold Against The Soul, and so have the Manics’ eight albums since. And here they are today. “I think what changed was the love of music, really, and the love of being in a band,” says Wire. “The fact we’re still together now when all our contemporaries have either split up – or split up and reformed and split up again … I think we were lucky. If we were [starting] a band now, we wouldn’t have the longevity, because you don’t get the chance anymore to grow like we did.”

It hasn’t all come easily, of course – and that’s putting aside even the Manics’ most regrettable musical decisions. In February 1995, guitarist Edwards – after a history of depression and self-harm – checked out of a London hotel and went for a drive. He was never seen again. The band kept on, and put out the Mercury Prize-nominated Everything Must Go in 1996. Almost immediately, the Manics became hot properties of the mainstream – and, unlike most, were not slightly shy of talking about their ambitions.

“It’s a really good point, because we were very blatant about the idea of getting into the mainstream,” says Wire. “I mean, it’s hard to explain to people now in what was a totally different landscape. You had a very elitist alternative/indie scene – which we did admire [for] a lot of that music. We grew up quite snobbish ourselves. But then all of a sudden when you realised how big The Smiths were, or The Clash, or you listened to Exile On Main St., we kind of thought … [if you] feel you’ve got something to say then you want to try and reach as many people as you can.”

And it worked. Since abandoning their initial get-in, get-famous, get-out plan for crashing the music industry, Manic Street Preachers have risen to the grandest heights of Welsh rock. They’re celebrated by their peers and progeny – Stereophonics, Lostprophets, Super Furry Animals and the rest – for imbuing Wales with a musical voice and enabling the world to hear it. But what does ‘Welsh rock’ mean to one of its primary figures? That wonderful, tumbling, euphoric sound of south-western Britain – from where did it come in the first place?

“I think it’s a class thing. I think there’s a definite working-class vibe to it, about self-improvement and self-empowerment, especially in the South Wales side of it. I also think there’s such a vocal tradition here – it might sound a bit clichéd, but even James was in the school choir, and you can hear that … [the Welsh] really are amazing singers. There were a lot of indie bands with that kind of phased, out-of-tune sort of singer, but that explosion in Wales in the ’90s, every one of them was more from the Shirley Bassey, Tom Jones tradition of just being brilliant vocalists. And it was a really political place to grow up in as well – obviously you had a lot of strikes and discontent, growing up in the ’80s, and it all produced a distinct sort of sound compared to the rest of Britain.”

Almost as soon as he mentions class warfare – that battle cry of any musician worth their salt in ’90s Britain – Wire checks himself. “Sometimes I feel like our generation is too obsessed with it,” he says, wary in the knowledge that he’s not speaking to old clichés now, but determined to go on. “We grew up through so much turmoil politically, perhaps we’re still using it as some kind of chip on our shoulder. But for me growing up, it was the whole idea of self-improvement through working-class education. I was lucky enough to get to university and do a degree in politics, and it was all tied in with something: pride in work and dignity. Whether all that stuff really exists anymore, I’m not really sure … But I’m not going to let it go (laughs). I think all people need a bit of a little thing that keeps them inspired. There’s a kind of poetic artistic side to the band and there’s more of a working-class political side. Sometimes one outweighs the other.”

Case in point: 2001, and the Manics’ visit to Cuba to play a concert before Fidel Castro at the Teatro Karl Marx. On the spectrum of working-class grandstanding, it was a bold gesture indeed. The Manics copped heavy criticism for the gig, and Wire still hasn’t decided whether it was a good idea or bad.

“I don’t know what it was, really. The whole premise behind it was never to endorse any sort of government. We just felt like… one, we wanted to do something completely different; to launch an album where you can’t make any money selling any albums, because there’s an embargo with Sony/Columbia – they didn’t even sell records there – so it was much more of that Situationist idea of subverting [capitalism]. But then again, it’s certainly caused us a lot of problems over the years, whether it’s visas with America, or going to former Eastern Bloc countries who obviously had a hideous time under communism – they don’t think it was a good idea that Castro turned up to one of our gigs.

Like any self-respecting Welshmen, Wire and his bandmates consider themselves huge rugby fans – so much so, their tour of Australia and New Zealand (the Manics’ longest run of dates since early 2012) ties in directly with the British And Irish Lions’ fixtures against the Wallabies. 2-1 to the Lions is Wire’s tip: “a bit of Welsh skill” to make the difference, he reckons. After that, the band will return to the studio to finish off its next two albums – the first, due by the end of this year, has a working title Rewind The Film.

“I think we genuinely wake up most days thinking we can communicate with people on a kind of visceral and intellectual level,” says Wire. “We don’t always succeed – God, over the years there’s been some great records and some average ones – but we wake up with that intent. We’ve been pretty prolific – we’re all sort of hitting 43, 44 now, and we’ve been averaging an album and a load of singles every year and half, every two years. As long as the desire to communicate is there, I think we’ll be okay.”